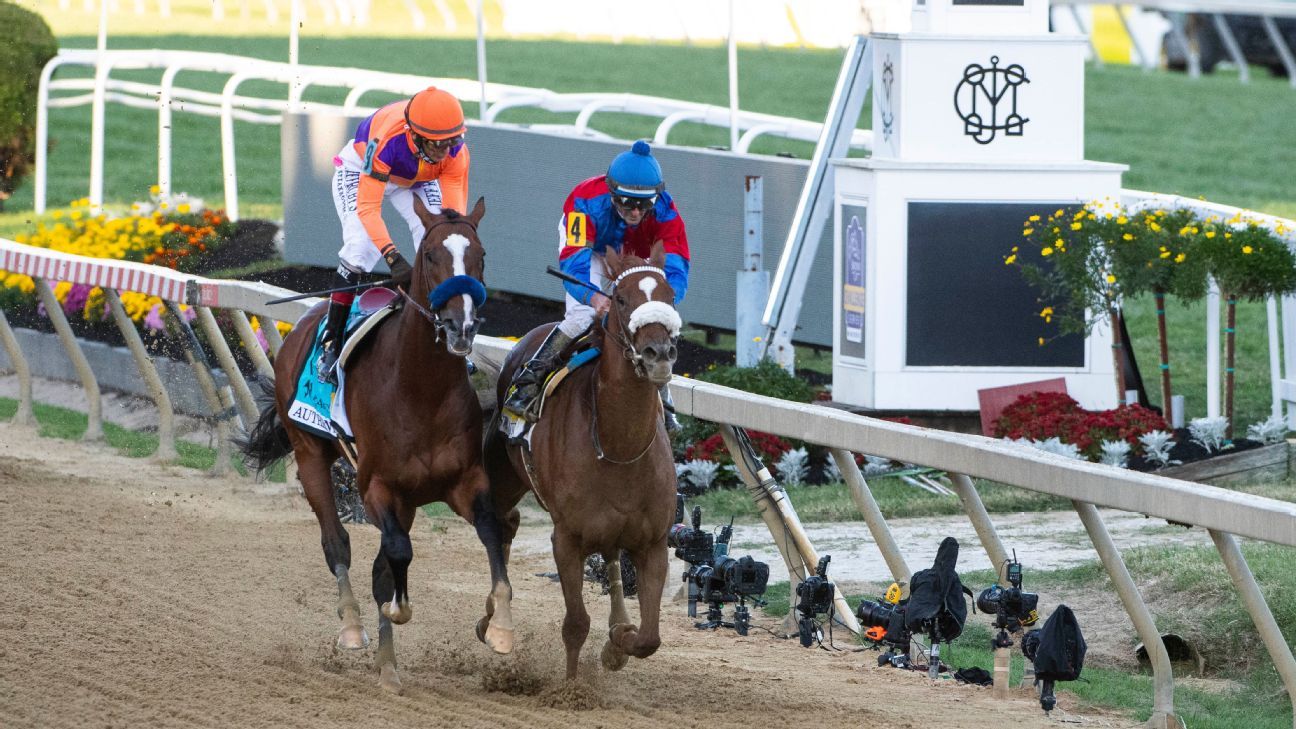 Jockey Robby Albarado made a power move to pass favored Authentic around the far turn, and Swiss Skydiver beat him by a neck after a stretch duel in the Preakness Stakes run without fans Saturday. She’s the sixth filly, and the first since Rachel Alexandra in 2009, to win the Preakness, which this year served as the third leg of the Triple Crown for the first time.

“Just a real honor to be around a horse like this,” said trainer Kenny McPeek, who got his first Preakness win and second Triple Crown race win. “It’s a special moment.”

Swiss Skydiver went off at odds of 11-1 and upset 3-2 favorite Authentic, who came in off winning the Kentucky Derby. Jesus’ Team was third at 40-1 and Art Collector fourth at 2-1. The 145th running of the Preakness at a mostly empty Pimlico Race Course came four weeks after the Kentucky Derby and 3½ months since the Belmont as they were held out of order for the first time since the 1930s.

McPeek won a Triple Crown race for the first time since the 2002 Belmont with Sarava, which was the biggest upset in the history of that race. Swiss Skydiver was the first filly to run the race since 2014, when Ria Antonia finished last.

Albarado made sure nothing like that would happen, taking the chance given to him by John Velazquez when Authentic’s Hall of Fame jockey abandoned the rail.

“I had an opportunity,” Albarado said. “I took advantage of the rail. Johnny stayed off the fence there, made a conscious decision to move at that time. Give or take now. If I make that move now or I wait and get smothered.”

Swiss Skydiver avenged her loss in her only other competition against colts, when she finished second to Art Collector in the Blue Grass Stakes on July 11. She had since won the Grade 1 Alabama at Saratoga on Aug. 15 and finished second in the Kentucky Oaks on Sept. 4.

“She never gets tired,” McPeek said.

Swiss Skydiver beating Authentic and Thousand Words denied trainer Bob Baffert what would have been a record-breaking eighth Preakness win. Baffert was looking for his 17th victory in a Triple Crown race.

The Preakness was run with only owners, trainers and essential personnel in attendance, a far cry from the usual mid-May party with patrons in fancy hats and suits in some areas of the track and revelers in shorts and T-shirts in the infield.

Even after canceling the annual infield concert and festivities, the Maryland Jockey Club and the Stronach Group, which owns Pimlico, hoped back in the spring that moving the race to the fall would allow for the possibility of having fans. Instead, all three Triple Crown races went on without them.

There was also no Triple Crown sweep for the 40th time in the past 42 years, when Authentic beat Belmont winner Tiz the Law in the Derby. Baffert wheeled Authentic back for the Preakness, but a rematch will have to wait for the Breeders’ Cup Classic Nov. 7 after trainer Barclay Tagg gave Tiz the Law a rest to point him to that $6 million race.