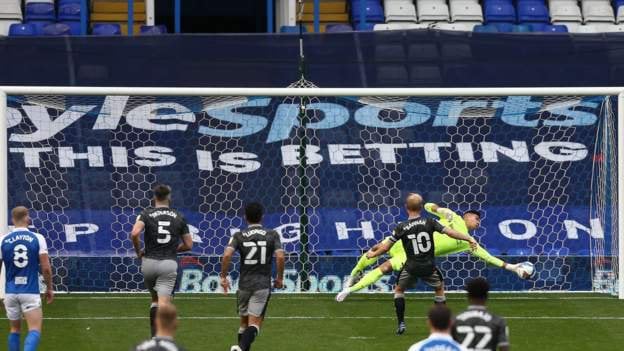 My Thoughts on the Birmingham team today.
(Would be interesting to see a Wednesday fan do the same.)

Etheridge 5/10 – Made a few good saves, not much more you can ask. He’s not going to save everything.

Colin 4/10 – Not sure why he has stopped going forwards as much since Sánchez’s arrival, but he needs to get his attacking head back.

Dean 7/10 (My MOTM) – Who is this player and what have you done with the static lump who we know? I don’t think I’ve seen Dean in the opponents half as much as i have this game, I think this is down to Clayton covering when he pushed forwards. He tried his best to create chances and push the team up the field. If he keeps this up he will be worth of the captaincy.

Friend 5/10 – Didn’t look confident with his passing. Lumped too many balls forwards in the 1st half, He thought he was playing with Juke not Hogan.

Pedersen 4/10 – Same as Colin, needs to push on more to give options to the winger with overlaps.

Gardner 4/10 – Achieved his goal of getting a yellow card for no real reason. Clumsy, offers nothing on the break, doesn’t break up play. Cant wait for Sunjic to take his place.

Clayton 5/10 – Played as a CB for lots of the game, but I’m not necessarily against that as Dean played more aggressively knowing he had Clayton to cover for him. Gave the pen away so I subtracted 1 point for that.

Sánchez 5/10 – Wednesday shut him out for much of the game. Most teams will now know he is a large threat, he needs to learn how to work around that. Good set play that’s refreshing to see in a blues shirt.

Crowley 3/10 – Would have preferred my nan or literally anyone else to play in his position today. Done more for Sheff than he did for us in the 1st half, looked like he couldn’t be bothered in the 2nd half. Wouldn’t be against selling him on in January if he keeps that style of performance up.

Bela 3/10 – Looked lazy at the 40th min mark, looked at deaths door at the 50th. He has had no competition for his position so hopefully his attitude will change with Leko now on the scene.

Hogan 5/10 – Had very few chances in the 1st half from every forwards ball being played over his head. Felt miles away from the midfield, that changed with Leko’s introduction. Had more chances in the 2nd but just needed to be more careful with them, he should have scored the free header.

McGree 4/10 – Some wayward passes and not strong enough with challenges shows he has lot’s to learn about playing in the championship.

Leko 5/10 – Was a busy body from his introduction, needs more time to get to know his team mates. Looked a little lost at times, but he linked up better with Hogan than Bela did.

Roberts 5/10 – Still wondering why he was brought on instead of the two CDM’s we had on the bench. Offered a few lumps up the field but nothing much past that.