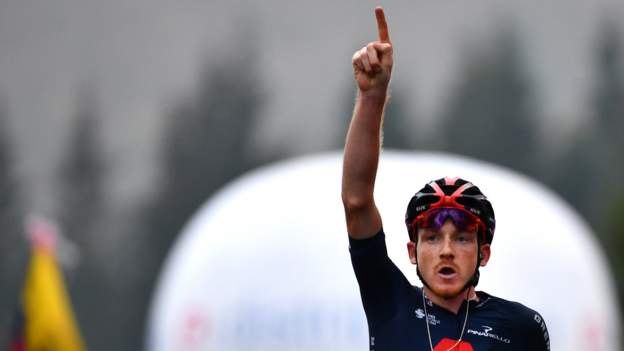 His win on stage 15 gave Ineos Grenadiers their fifth stage victory at the 2020 Giro, while Deceuninck-Quick Step’s Joao Almeida held onto the leader’s pink jersey.

Several of the main contenders lost time on the 153km route from Base Aerea Rivolto to Piancavallo north of Venice.

Geoghegan Hart, 25, powered past another contender for pink in Sunweb’s Wilco Kelderman for the win in the final few metres of the category one summit finish, after the Dutchman’s team-mate Jai Hindley had led up the long final climb.

Geoghegan Hart dedicated the victory to Nico Portal, Ineos’ sporting director who died of a heart attack aged 40 in March this year.

“This is something incredible for me. I don’t know about [the GC], I haven’t seen the results – but crossing the line first is something truly incredible.

“This one is for Nico Portal. We lost him this spring and it’s been really difficult for the team – this season has had great highs and lows, in the Tour [de France] and for me personally, and also in this race.

“We just have to foster the Grenadier spirit in this team and keep fighting back like we know we can.”

Is Geoghegan Hart a serious contender?

Despite his young age, the east Londoner has long been a part of the Ineos/Sky set-up as a domestique, but like so many of the team’s riders he is capable of winning the over general classification in stage races.

Race favourite Geraint Thomas crashed early in the Giro and abandoned after he suffered a fractured pelvis when a discarded drinks bottle became lodged under his front wheel.

It appeared Ineos would have to settle for trying to win single stages for a second Grand Tour in succession after a disastrous Tour de France.

But this has been one of the most unpredictable Giros for years, and after spending at least a week more than three minutes down, Geoghegan Hart finds himself in contention even at 2mins 56secs behind.

His biggest strength is climbing, and as the race heads for a final week’s racing in the ever-colder Italian Alps – where organisers fear snow and ice could affect the racing – he stands a good chance of gaining time, especially on leader Almeida who is thought to be more effective in time trials.