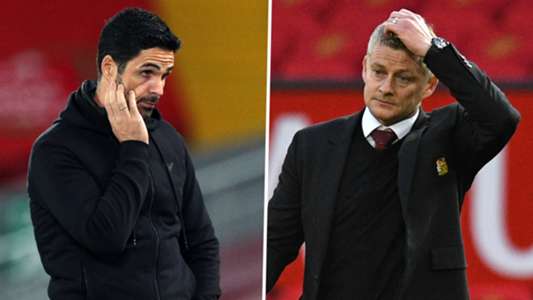 Arsenal’s rivalry with Manchester United has “lost its cutting edge” because neither side is able to sign the best talent available and have tumbled down the Premier League pecking order as a result, says Nigel Winterburn.

Meetings between the Gunners and Red Devils were once the standout fixtures on an English top-flight schedule.

The outcome of contests that pitted Arsene Wenger and Sir Alex Ferguson into tactical battle would often determine the destination of a domestic crown.

That is no longer the case, with those on the red halves of north London and Manchester having endured humbling falls from grace.

Passion has ebbed away from both camps, with Mikel Arteta and Ole Gunnar Solskjaer taking on sizeable rebuilding projects in their respective posts.

They will lock coaching horns at Old Trafford on Sunday, but Winterburn feels both teams are lacking a spark and cannot see either forcing their way back into title contention any time soon.

The former Arsenal defender told FreeSuperTips: “Manchester United and Arsenal has lost its cutting edge as the game is not as physical as it once was, and both teams are no longer feared in the Premier League like they were when I was playing.

“When I was coming through, Manchester United were the team that everyone in the Premier League was desperate to beat.

“At Arsenal, you always felt that if you beat Manchester United in the league, then you would finish ahead of them and have a great chance of winning the title.

“Those games, you had added intensity because of the history and incidents that would happen that made those games so special, and as a player you wanted to be a part of those games.

“They are still two huge clubs, but they’re not teams that are fighting for the title and have both fallen down the pecking order when it comes to signing the best players.

“Arsenal were always going head-to-head with Manchester United for league titles, and that is where the intensity stemmed from and where they have both fell off in recent years, the game has lost its edge.

“It must be said that the rivalry is not what it was, but it is still a huge game which the players should be able to motivate themselves for.”

If Arsenal are to start turning the tide, then they need to dramatically improve their record on the road against fellow members of the so-called ‘Big Six’.

It could be that they are running into United at the perfect time as, despite their impressive results in Europe, the Red Devils have also looked out-of-sorts this season and are yet to win a Premier League home game in 2020-21.