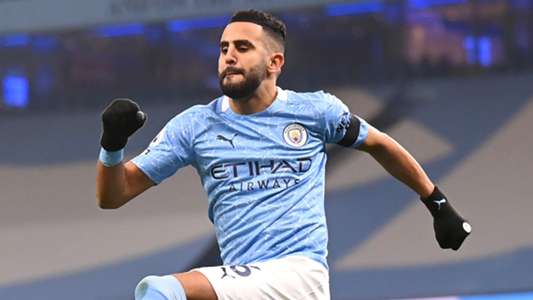 Riyad Mahrez was a little “predictable” when joining Manchester City, admits Paul Dickov, but the Algerian winger is now considered to be a “top player” who can look “unplayable” at times.

The Blues have invested heavily in a man who inspired Leicester to a remarkable title triumph in 2016, with the PFA Player of the Year award winner snapped up for £60 million ($82m) in 2018.

That deal made Mahrez City’s record signing and thrust him under the brightest of spotlights at the Etihad Stadium.

Fierce competition for places meant that he was not always assured of a starting berth under Pep Guardiola.

He has, however, edged his way up the pecking order and has now taken in 116 appearances for the Blues – collecting another English top-flight crown along the way.

Mahrez’s ability to create from the flanks has never been in doubt, but Dickov says his game has become more complete in recent times as he no longer relies solely on working the ball onto his left foot.

The former City striker told the club’s official website of a player with 30 goals and as many assists to his name: “Over the last 18 months he’s mixed it up a bit.

“We know he likes to play on the right-hand side. I wouldn’t say he was predictable because he has fantastic talent, but he was coming inside on his left a lot.

“The pass to Kevin De Bruyne against Birmingham for Bernardo Silva’s second goal was world-class.

“He’s got everything. When he’s playing with a smile on his face and he’s got the space to express himself he’s a top player.”

Dickov is not the only former City star to have been singing Mahrez’s praises, with Michael Brown another to have seen notable progression from the 29-year-old during his time in Manchester.

He has said after witnessing a 1-0 victory over Brighton on Wednesday: “When he’s smiling and enjoying his football, it’s brilliant.

“In such tight areas he is great, but if there is space there for him, he can cut left or right, he likes to come inside. Once he’s in the box, you can’t go near him with that late chop that he’s got.

“I wouldn’t want to play against him! He’s got such ability and at times he’s unplayable.”

Mahrez was replaced after 67 minutes of City’s narrow victory over Brighton, with Phil Foden grabbing the only goal of a game that saw Raheem Sterling miss another penalty for the Blues.

Yandle keeps games streak alive, has 100th goal
This 30-Second Anxiety-Calming Breathing Exercise Works Wonders on My Stress Levels
Headley, longtime trainer with 902 wins, dies
Where did it go wrong for ‘Assist King’ Ozil at Arsenal?
Big game no shows, the Mourinho omen and all the stats which point towards Lampard’s sacking, following Chelsea’s defeat to Leicester