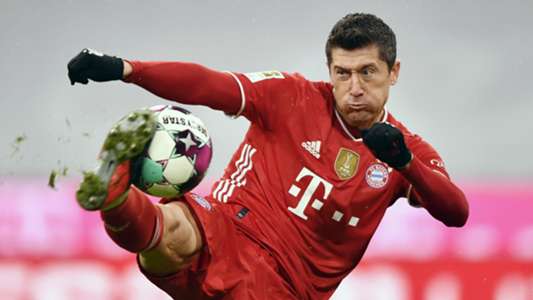 The striker opened the scoring just nine minutes into the first leg of the last-16 tie in Rome when he intercepted a pass from Lazio defender Mateo Musacchio.

The Polish forward rounded goalkeeper Pepe Reina and knocked the ball into the empty net as Bayern took control of the tie in the early stages.

How many Champions League goals has Lewandowski scored?

It is his 72nd goal Champions League goal, putting him above Real Madrid legend Raul into third place.

Only Juventus forward Cristiano Ronaldo, who has 134 goals to his name, and Barcelona talisman Lionel Messi, who is on 119, have scored more than Lewandowski in the competition.

Bayern extended their lead 15 minutes later when Jamal Musiala brought down a pass from Leon Goretzka on the edge of the box and fired it low past Reina.

The 17-year-old, who joined Bayern from Chelsea’s youth academy in 2019, is the youngest English player ever to score in the Champions League.

Musiala became the youngest to score in the Champions League for a German club, too.

He is also the second-youngest player to find the net in the knockout rounds. Former Barcelona attacker Bojan is the record holder.

Bayern found themselves three goals ahead at half-time when Leroy Sane pounced on the rebound of a Reina save and tapped in.