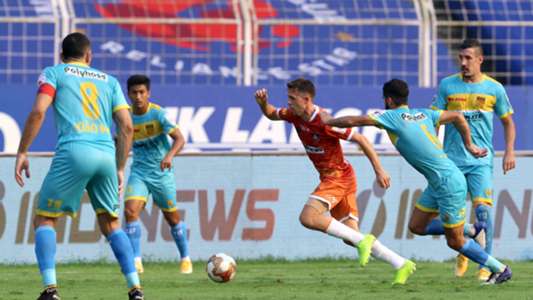 FC Goa have become the fourth team to qualify for the 2020-21 Indian Super League (ISL) playoffs following their 0-0 result against Hyderabad FC on Sunday.

Mumbai City were the first team to qualify for the playoffs this season after their 3-3 draw against FC Goa, with four games to go in their current campaign. The Islanders were followed by ATK Mohun Bagan after Hyderabad held East Bengal to a 1-1 draw in a Matchday 19 fixture.

With NorthEast United confirming their second appearance in the playoffs after the Highlanders defeated Kerala Blasters 2-0 on Friday, the battle for the final spot was between Goa and Hyderabad who faced each other in their final game of the league stage.

The Goan outfit, led by Juan Ferrando this season, has undergone a revamp and only has a few familiar faces from last season. They finish the season fourth on the table with 31 points from their 20 games.

Having failed to qualify for the semi-finals just once before in 2016 when they finished at the bottom of the league standings, FC Goa now bettered their own play-off appearance record. The Gaurs now have a record number of six playoff appearances, the most in the history of the competition.

Whereas Hyderabad, under the tutelage of Manuel Marquez who has extended his stay at the club for another two seasons, has punched above their weight with a number of spirited performances during their campaign but unfortunately they finished fifth on the points table with 29 points from 20 games.