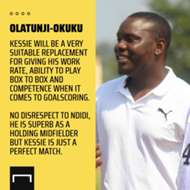 The Cote d’Ivoire international will fit in better into the Netherlands international’s shoes at Anfield, according to the Nigerian

AC Milan’s Franck Kessie will be a ‘suitable’ replacement for Georginio Wijnaldum at Liverpool following the Dutchman’s move to Paris Saint-Germain, according to Samuel Olatunji-Okuku.

The 30-year-old joined the Reds from Newcastle United in 2016 and he went on to make 237 appearances for Jurgen Klopp’s side across all competitions, scoring 22 goals with 16 assists to his credit.

Having failed to reach an agreement with the Anfield giants over a contract extension, the midfielder joined the Ligue 1 outfit on a three-year deal.

As the football world continues to talk about a possible replacement for Wijnaldum in Klopp’s squad, many have tipped Leicester City star Wilfred Ndidi for the job. However, the seasoned football administrator feels otherwise.

“Franck Kessie will be a very suitable replacement given his work rate, ability to play box to box, and competence when it comes to goalscoring,” Olatunji-Okuku told Goal.

“For Ndidi, he won’t be able to fill that role because Liverpool already have Fabinho.

“So, there will be no sense in seeing him leave Leicester City – where he is king – to Anfield where he would be playing second fiddle to the Brazilian.

“No disrespect to Ndidi, he is superb as a holding midfielder but when it comes to a box-to-box kind of midfielder, Kessie is just a perfect match.”

During his time at the Premier League club, Wijnaldum won four major trophies, including the Champions League and Premier League – with the 2019-20 title marking the Reds first top-flight crown in 30 years.

To Olatunji-Okuku, Liverpool have lost a great player while stating that Mauricio Pochettino’s men will benefit a great deal from the Netherlands international’s experience.

“That is a big loss for Liverpool and replacing such a player will cost them a lot of money,” he continued.

“Take a look at when Klopp’s men won the champions league. You could see the impact of this player.

“Wijnaldum is that kind of player that gives you energy in the middle of the park. He is aggressive, he can win the ball back and he is a good passer of the ball. He is just so exceptional.

“Such players are not so easy to find these days and there are only a very few of them on the planet.

“So, I keep asking why Liverpool had to let him leave. Anyway, PSG have gotten themselves a great bargain.”