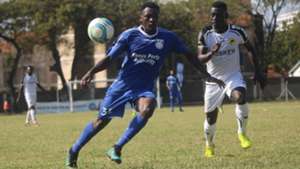 Bandari 2-1 Tusker FC: Dockers come from behind to grab maximum points against Brewers

Tusker FC surrendered the top position in the FKF Premier League top to KCB after falling 2-1 to Bandari at the Mbaraki Stadium, Mombasa, on Wednesday.

The Brewers took the lead after Rodgers Aloro converted from a set-piece before Iddi Hassan answered for the hosts in the same way, and substitute John Mwita scored the winner.

Both teams were keen on getting back to winning ways after suffering defeats in their previous assignment, as Bandari had fallen 4-1 to Nzoia Sugar while the Brewers fell by a solitary goal to Nairobi City Stars.

It was the visitors who started the game on a high and it took them three minutes to get their first corner. However, Danson Namasaka bailed the hosts out with his clearing header.

The Robert Matano-led charges were forced to make a change in the eighth minute, as Boniface Muchiri, who was making a return to the team after the Cecafa U23 Cup with the Emerging Stars, was involved in a collision.

Henry Meja, who was also part of the Kenya team in Ethiopia, took his place in the team.

Bandari stepped up, pushing for an opener with Hassan Abdallah, Umar Kasumba, and William Wadri leading the attack. However, they couldn’t find their way past the Tusker custodian.

Tusker also had their chances, but Luke Namanda, Kevin Okoth and Meja failed to capitalise on the opportunities that came their way.

Eventually, it was the 11-time champions who managed to score in the 38th minute, when the Dockers conceded a free-kick in the danger zone, Aloro took it and managed to hit the target.

Meja would have doubled the advantage moments later but he failed to beat the goalkeeper in a one-on-one situation.

After the half-time break, the hosts came back stronger hoping to get an equalizer quickly to destabilize the Nairobi-based charges. John Mwita and Collins Agade were introduced in place of Denis Magige and Namasaka.

Mwita, almost, made an immediate impact as he was left unmarked in the danger zone, but his stinging effort was parried out by the Tusker goalkeeper for an unfruitful corner.

The renewed energy from the hosts paid dividends in the 56th minute, when the Brewers gave away a set piece just outside the danger zone. Hassan stepped up and guided the ball into the back of the net to bring the teams to level terms.

The Dockers scored their second goal in the 75th minute; Mwita capitalised on the confusion created in the Tusker defence to get the winning goal.

KCB are now top of the league with 57 points after defeating Western Stima 2-0.